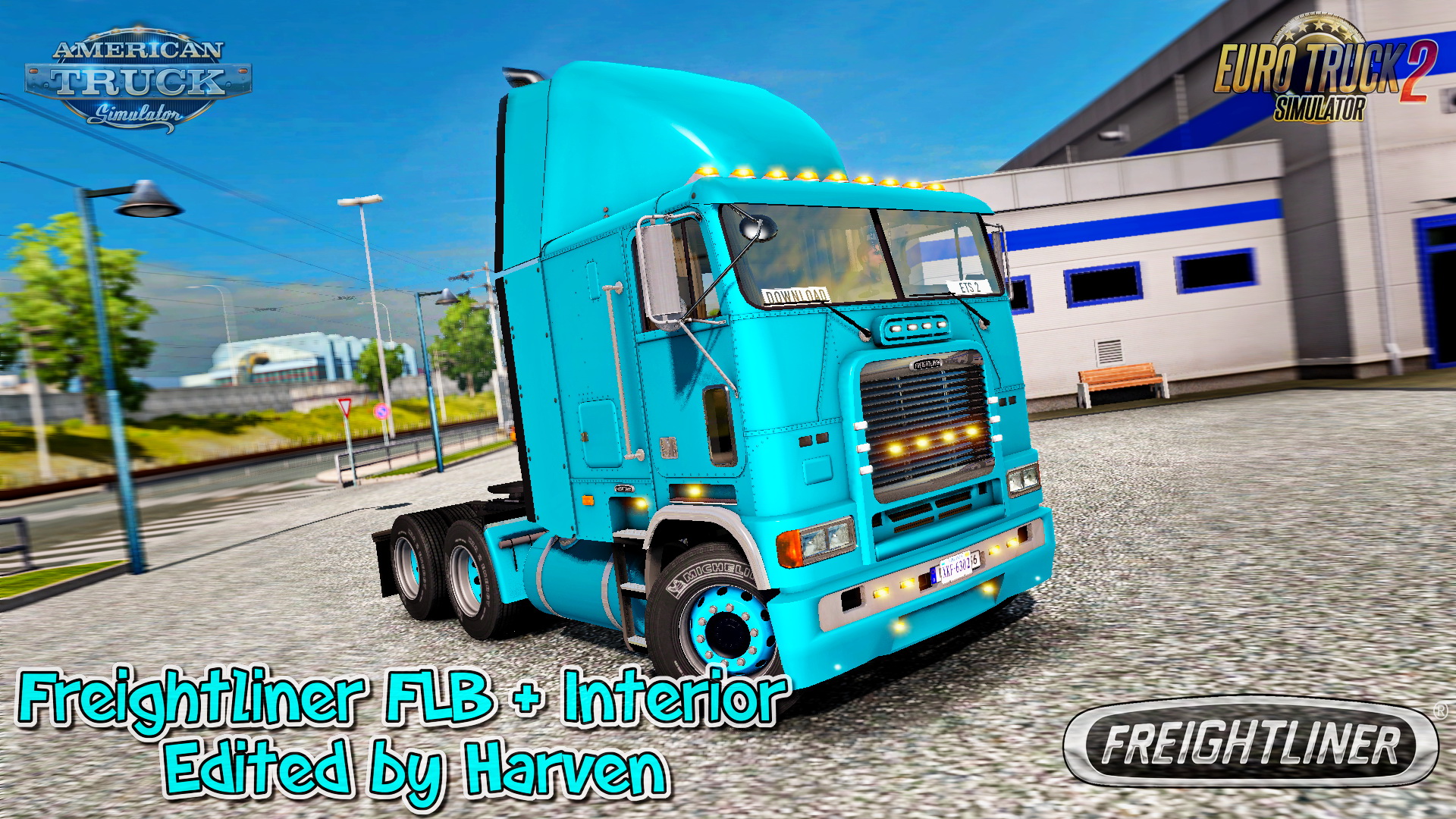 A great addition added to the game Euro Truck Simulator 2 is Truck Freightliner FLB + Interior Edit by Harven for 1.35.x game version, which can be downloaded for free and without registration. You can also see other fashion from the category Trucks for Euro Truck Simulator 2 or go to the main section ETS 2 mods.

This version of FLB is based on Solaris36 edit for ATS. I spent a lot of time fixing/improving/polishing it and I think I’m finally ready to share it with you. The list of changes is very long because I wanted to make this truck as good as I could, not just fix errors so it’s playable. There are still some things I would like to improve (so expect another versions!). Please view the changelog to see full list of new features, fixes and improvements.
You can buy the truck at iveco EU dealers. In case you have any other FLB trucks, sell them before installing this mod, you will probably get lots of errors otherwise.
Features truck Freightliner FLB:
- independent truck model
- High quality 3D model
- High quality detailed exterior
- High quality detailed interior
- passangers seats
- the model has own interior
- the model has own sound
- the model has own wheels
- present the illumination of arrow speedometer and tachometer
- animation parts on interior
- the character is correctly sitting in the driver's seat
- the choice of wheels configuration
- the choice of color body, metallic, skin
- the choice of chassis
- the choice of transmission, gearbox
- the choice of power engine
- correct position of the Freightliner logo
- Working headlights, brake lights, tail lights, front and rear turn signals, steering wheel and reverse signals
- The correct position of the player
- Tuning and accesories present
– interior accesories configuration
- Supports all major functions of the game
- buy from Iveco dealer

Old Changes
Changes in v2.0.5:
– Fixed OpenGL errors (works on mac & linux),
– Advanced coupling with collisions,
– Fixed black mirrors,
– Steering wheel customization (support for Steering Creation Pack DLC (ATS), dragon wheel (ATS) and SISL wheels),
– Support for all interior accessories DLCs (ETS2),
– Steering wheel adjustment,
– Fixed steering wheel rotation (900 degree rotation, was 720),
– Redone all interior animations,
– Improved dashboard – (removed gear indicator, added turbo, brake application, suspension load and mpg gauges, added analog clock, added more labels, etc.),
– Made the 4×2 chassis a bit longer so cabin will no longer collide with a trailer,
– Replaced all engines with new ones made by me (those are a bit older engines: cat 3406, cummins n14 and detroid diesel series 60) all with torque curves (more or less accurate) and other parameters taken from specifications,
– Engine displacement values added to the engine name labels,
– Reworked engine sounds (3 different sets of sounds for cat, cummins and detroit),
– Removed other non standard sounds (like brakes, gear noises etc.). Use your favorite sound mod instead
– Removed SISL’s accessories. You can still use them by subscribing to SISL’s Mega Pack at Steam Workshop, but they are no longer provided with this mod. That way the mod weights less and you will get updates to accessories when SISL releases them,
– Better balanced parts prices, added progression,
– Changed the way you choose the truck chassis. It generates “Redundant wheel accessory” (harmless) error message in the console when switching from 4×2 to 6×4, but it’s more flexible. Now you have a choice of 6 chassis: three 4×2 and three 6×4. Each variant has three different fuel tank sizes (180, 220 and 260 gallons), and of course truck weight differ between each configuration,
– Added passanger side mirror,
– Reworked chassis texture – it no longer looks damaged and old,
– Replaced 5th wheel with SCS one,
– Fixed rear axles alignment with wheels,
– Fixed interior camera rotation (you still can move to the bed but the view will no longer clip through the cab back wall),
– Added customizable front fenders (plastic, painted, chrome),
– Replaced roof lights with customizable lights slots,
– Added slots for horns,
– Added optional roof wing,
– Added back window glass and far small window glass (so it shows rain droplets),
– Fixed truck UI shadow,
– Added some other missing in-game shadows,
– Lowered engine oil pan so there is no longer an empty odd looking space between front wheels,
– Added missing icons,
– Added more detailed headlights,
– Fixed fuel tanks straps (they no longer loose ;),
– Added painted tanks option (with chrome straps),
– Added tanks, front bumper, front bar, fenders and mudflaps holders to the skin UV map (see ESO skin),
– The handlebars next to the doors are now chrome,
– Changed seats profile, now looks like a person can actually sit on them
– Scaled seats texture mapping, so now it looks more detailed,
– Other minor fixes.

I also made separate mini-mods to support all available steering wheels (ATS)
and accessories (ETS2). If you own some of those DLC, just subscribe to appropriate mods and
place them above the truck file in the mod manager screen. In case of ETS2 there is also all-in-one
mod file which supports all available DLCs, so subscribe ro just this one file if you own them all.

Have a nice ride!
- Harven