Enhanced Driving Experience v2.0 for Ets2 1.37.x game version
*EDXP is the acronym for "Enhanced Driving Experience".
New version 2.0:
2020 JUN 22 (1.37.2)
--------------------
- Reduced spawn rates of traffic trailers of "Operation Genoa Bridge 2020" back to standard in observance of the event conclusion.
- Increased blinking rate of yellow light on traffic signals in sleep mode.
2020 JUN 7 (1.37.1)
-------------------
- A FRESH START!! Boeing73FLY's Enhanced Driving XPerience 2.0 ... released!
- Some features from version 1.0 may not be implemented until the next mod update.
### ANYTHING BELOW THIS LINE IS PRE-FMOD ERA ###
Version 1.11.3:
- Added "Pink Ribbon" event trailer traffic for October
- Spawns rarely
Version 1.11.2:
- Reworked spawning of 80kph traffic
- Reduced traffic without trailers
Version 1.11.1:
- Re-worked sounds
- Better quality AI engine sounds, loudness versus displacement (petrol vs. diesel)
- Constant sound volume across all car and truck tires
- According to the poll votes, thunder will now play...
- slightly later (few seconds longer silence)
- slightly softer treble levels, but still retaining semi-heavy bass levels
- Adjusted traffic light timings in the Baltics
- NOTE: Some traffic lights will be temporarily disabled for 24 hours as a way for me to find them in order to fix them in the future.
- Help is greatly appreciated by reporting and sending me the location DURING DAYTIME in-game.
- Added more variety of trailer traffic
- Added "spawn_ratio" of 10% to some 80-kph low bed trailers
- Returned clocks set back 1 hour for Snow Version for certain areas
Version 1.10.1:
- Fixed precipitation and thunder sounds for Snow Version (a common mistake I will probably keep making).
- Has not been reported for several versions. Geez...
Version 1.10.0:
- Compatibility update for version 1.33
- Trailer definition updates.
- Use of code "company_paint_job: true" for multiple liveries of trailers.
- NOTE: Addon for the Baltic DLC will come during December (exact date unknown).
This is a little mod package that I originally made for myself in order to make the driving
experience AND the in-game experience a little more "realistic". It contains several modifications to
definitions and sounds. It has remained private for several versions of ETS2...until now.
Here is an outline of what has changed (NOTE: Points with a # symbol indicate something is not yet implemented):

Show/hide text
DEFINITIONS
- Vehicles
- All AI cars, trucks, and buses have realistic acceleration and top speed behavior.
- For every car, engine power and weights have been carefully researched. Each car will accelerate differently. The primary source of information is "automobile-catalog.com". The secondary source of information is "car.info".
- Top speed for every car is based on either factory tire specifications, a set speed limiter by the manufacturer, or a theoretical calculation from "automobile-catalog.com".
- Top speed for every semi-truck varies according to certain configurations and conditions (Euro maximum 90 km/h).
- Trucks pulling some oversized loads will travel according to the displayed speed number on their trailers.
- Top speed for every bus is 100 km/h. Most of them, if not all, have been at the correct setting.
# In traffic, there is more variety of trailers (empty and loaded).
# The following Combination Vehicles (CV) are added...
# Doubles.
- Traffic density has been reworked.
- Special thanks to cipinho for letting me use part of his Real Traffic Density mod!
- World
- Traffic signals have longer and realistic timings.
- Green light interval is at least 20 seconds.
- Left-turn interval is 10 seconds.
- Amber (yellow) light interval is 3 seconds.
- 5-second delay interval between signals.
- Every signal (except on larger intersections) is disabled from 23:00 to 05:00.
SOUND
# AI
# Car, truck, and train sounds are emitted based on engine specifications.
# Example: If you see an AI Scania with a V8 badge, you'll hear the actual V8 sound as it drives past.
# Horn sounds for both cars and trucks have changed.
# Police sirens are replaced with more realistic-sounding ones (Euro style, particularly German).
# For now, the sirens are German style until game code allows for multiple styles of sirens for certain countries.
# Environment
# Bad Spring/Summer/Fall Weather
# Rainfall is slightly louder, noticeable during heavy precipitation.
# Feel Thor's power through your speakers with better thunder sounds!
# Bad Winter Weather
# When it is snowing, all you can hear is the sound of air (wind).
# Mover
# Sounds have been added to various movers such as flags, hot air balloons, and commercial airliners.
Some sounds such as the helicopter have been improved.

*PLEASE NOTE*
This mod must be installed at a higher priority over other sound or AI mods.
*- Some trailers in AI traffic may not have cables connected, and this will cause annoying warnings in the console.
I suggest going into Gameplay settings and set trailer cables to only appear on your truck. (NO FIX)
This update will be Steam Workshop exclusive.
As of this date, the mod has been updated. Happy trucking!
Screenshots Mod 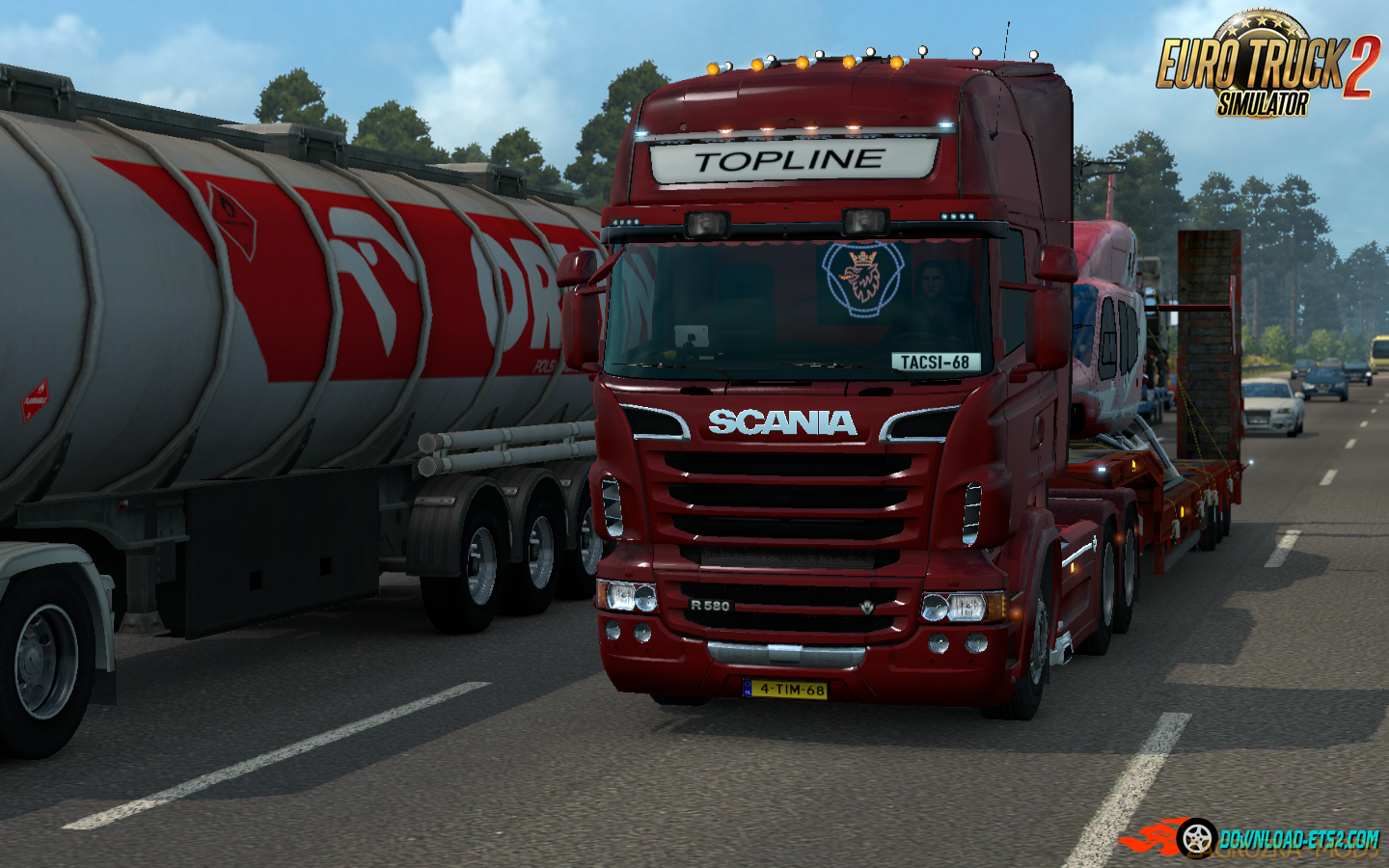