VNL Truck Shop v1.5+ (BSA Revision) (1.35.x and up) for ETS2 | Euro Truck Simulator 2 game.
ATTENTION!:
Before adding this mod to the game, you have to sell all the Volvo VNL trucks from previous version of the mod and save your profile!
Then you must disable the related version in the mod manager and activate this version!
Then load the game and buy the truck again, provided that you want to use your old save.
Otherwise you will meet crashes of the game, because of too many new things in this mod, including changes in the registration!
If you start a new profile, no manipulations with the mod will be required.
Any complaints about game crash when not performing the above mentioned actions will not be considered!
Volvo VNL 300, 430, 630, 670, 730, 780, VT 830, 880
Features:
Volvo VNL truck mod for ETS2 v1.35, or higher.
- 8 cabins
- 5 chassis
- Its own tuning.
- Volvo dealers, mod dealers.
- Painting support, including metallic.
- Advanced Coupling System support.
- Trailer cables support.
- DLC Steering Creations Pack included.
- Warning flags and front banner included.
- Horns included.
Mod author: BigBob, SCS
Adaptation for ATS: chashkin23
Tuning and improvements of the model: Andrew Chashkin. (chashkin23)
Sounds: Kriechbaum, odd_fellow, SCS
Onboard computer: piva
& some others.
Special thanks to everyone who helped me to master ZModeler and 3DS MAX, as well as to
those who assisted me with the creation of the mod: Vladislav Krankel-Varter,
Denis Zobnin (DANZ), Dmitry Muhanov (Stels).
BSA Junk Yard Revision notes:
- Based on Volvo VNL Truck Shop version 1.4+ for ATS v1.32. Adapted for ETS2;
- Updated: up to ETS2 v1.35.1.13;
- Fixed: multiple fixes and corrections;
- Added: trailer cables, warning flags, front banners for all the bumpers, VT830 cabin,
8x4 chassis for VT830 cabin, some accessories for this chassis, horns, VNL630 (two variants of)
to AI truck traffic, DLC Steering Creations Pack, absent and necessary files for to
work properly with ETS2, added to UK Volvo dealership and to UK companies' quick jobs;
- Revised: trucks' and some accessories' models and files;
- Changed: some changes for the truck model and for some accessories' models, added collision for headache racks;
- Deleted: some useless files.
Tested on game versions 1.35.x and 1.36.x beta
All the works on optimization of the models, just as on new features
for the trucks had been planned for autumn/fall of 2019, this release is
just update to meet requirements of the new versions of the SCS Software games.
Screenshots Mod 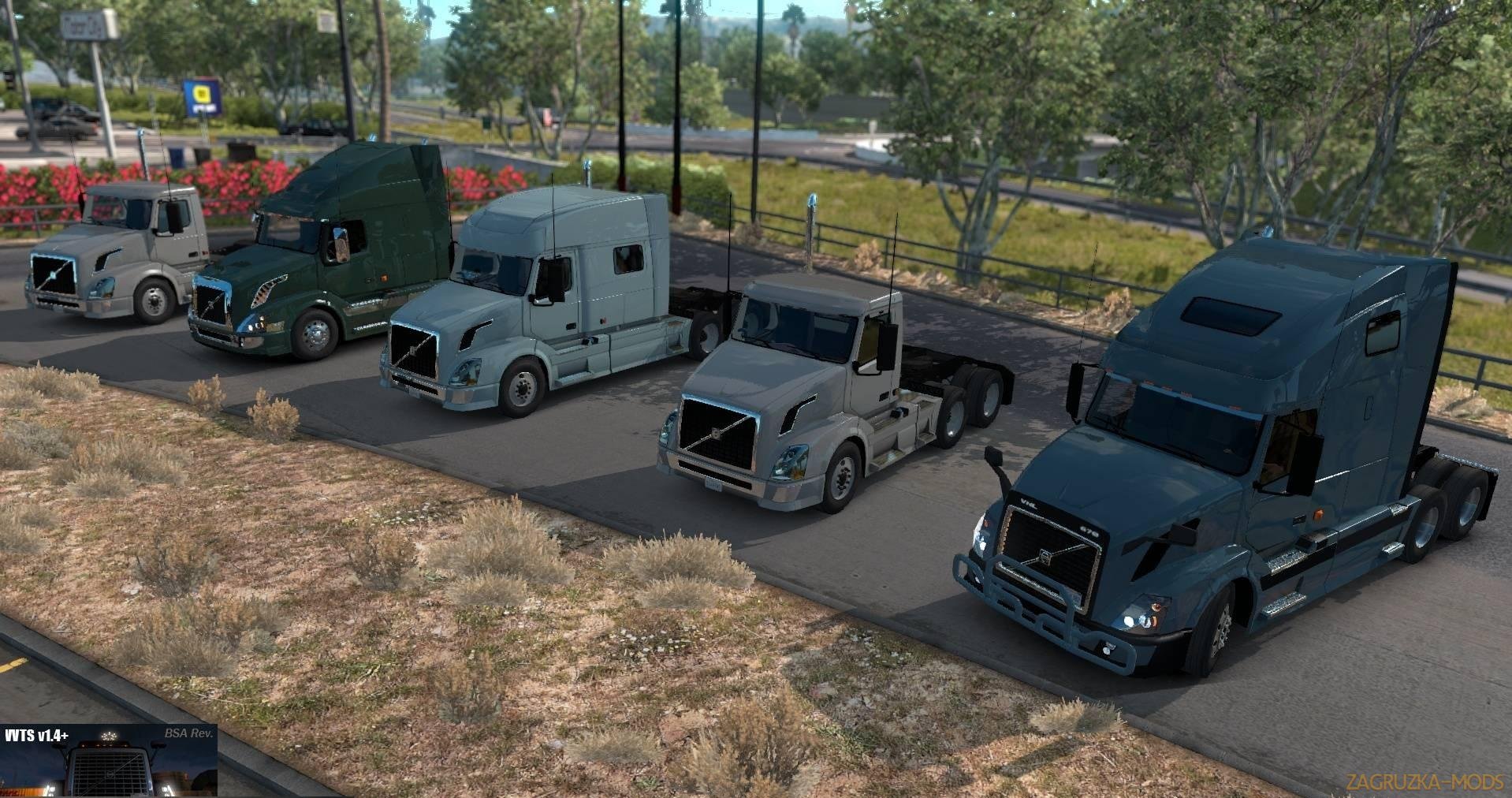