Category - ATS Maps
Version game - 1.46.x
Credits: - Team Reforma
Last edited by: Zagruzka - 2-12-2022, 12:19
Reason: Mod Updated to v2.4.4
Report Material
Download mod Reforma Map v2.4.4 (1.46.x) for ATS | American Truck Simulator game.
A great addition added to the game American Truck Simulator is Mod Reforma Map for 1.46.x game version, which can be downloaded for free and without registration. You can also see other maps from the category Maps for American Truck Simulator or go to the main section ATS mods.
Reforma Map - quality mod which combines maps in one pack for ATS players. Merging Pazz, Mexico Extremo, Mexxsimap, Viva Mexico and free parts of the Eblem beta into one map. Now you can download one pack, connect and play.
Features Reforma Map:
- Now Viva Mexico and all addons for it in one Reforma map;
- Everything goes with one halyard Mega Resources is not needed;
- Added new roads, cities and areas;
- Added new models and textures;
- The correct signs are installed on the American part of the map;
- Improvement of the scenery, especially in the old parts of the Sierra Nevada;
- All map DLC's is required for this map (Utah, Oregon, Washington, New Mexico, Idaho, and Colorado)
Changes in v2.4.4:
- Fixed an invisible wall in El Paso and Durango, Mexico
- Fixed the problem of the clock belt in the El Paso region with a mountain clock belt
- Fixed traffic registration
- The time for delivery and speed restrictions for the Mexico card is corrected, now they should be the same as on the base map in all - Mexican states
- Fixed Rafi behavior on Mexico map
- Added a border checkpoint in missing border crossings Changes in v2.4.3 (1.46.x):
- Adapted to the latest game patch 1.46;
- New US 67 road route between Presidio and Marfa west Texas
- New fixed connection to SCS El Paso.
- Functional company for Peterbilt added in map
- New assets included in the new version of Mega Resources.
- New details added in map, such as markers
- New terminal port in Mazatlan
- New delivery area in Zacatecas
- Some tweaks over gas stations in Mexico map.
- General bug fixing all over the map, thank you to everyone who is supporting us
- TEXAS DLC is required for this map to work.
Download #2

Changes in v2.3.1 (1.44.x):
- Adapted to the latest game patch 1.44;
- General bugfix over the map, reported by different users;
- Replaced Reforma's Sacramento to SCS Sacramento, due to map link compatibility. Possibly after the complete SCS California Rebuilt we might do something there to replace back our work and different content, can't promise;
- New connection south of Redding to SCS CA Rework;
- Reforma's Truckee was replaced in some areas, but most of Reforma Truckee remains the same.
Download #2 | Download #3

Changes in v2.2.5 (1.43.x):
- Adapted to the latest game patch 1.43;
- General bugfix over the map, optimization, render distance issues;
- Mega Resources is now required to work with Reforma, included inside the zip.
Download #1

Old Changes
Changes in v2.2.2:
- Fixed several holes on the I-80 and I-580 tracks near Reno and Carson City;
- New model of the bridge for Balluart (Durango Masatlan);
- New Mexican Warehouse for Delivery (Roedores) on the basis of popular in Mexico Castores transport company, located in San Luis Potoshi, Mexicali, Durango, Masatlan, San Luis Rio Colorado and Chihuahua;
- Improving payment points in Aguascalientes and zakatecas.
Download #1

Changes in v2.1.6:
- Merge of Pazz, Mexico Extremo, Mexxsimap, Viva Mexico and free parts of Eblem's beta work into one map
- No more separate download of files, but map mod in one file (includes the mega resources too)
- Compatibility for 1.40 version of ATS
- New areas by Pazz, Indio, and Palmspring
- Chihuahua Beta 5 by Eblem released for FREE and added to this map
- New Mexico themed models (thanks to Stephanie)
- Bug fixing (both visual as performance fixes)
- Introduction of service signs on USA parts of this map
- Reworked/rebuilt older parts of the map (both USA and Mexico)
- Scenery improvements, especially in older Sierra Nevada parts
Download #1 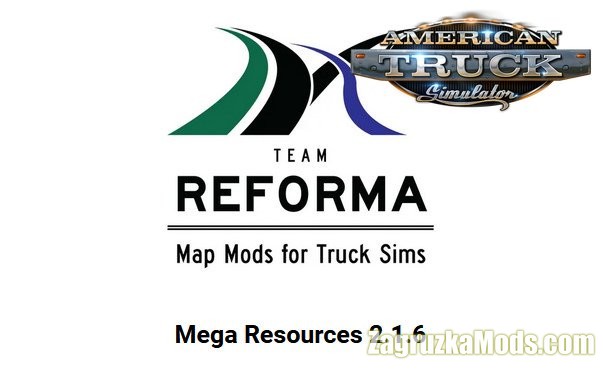 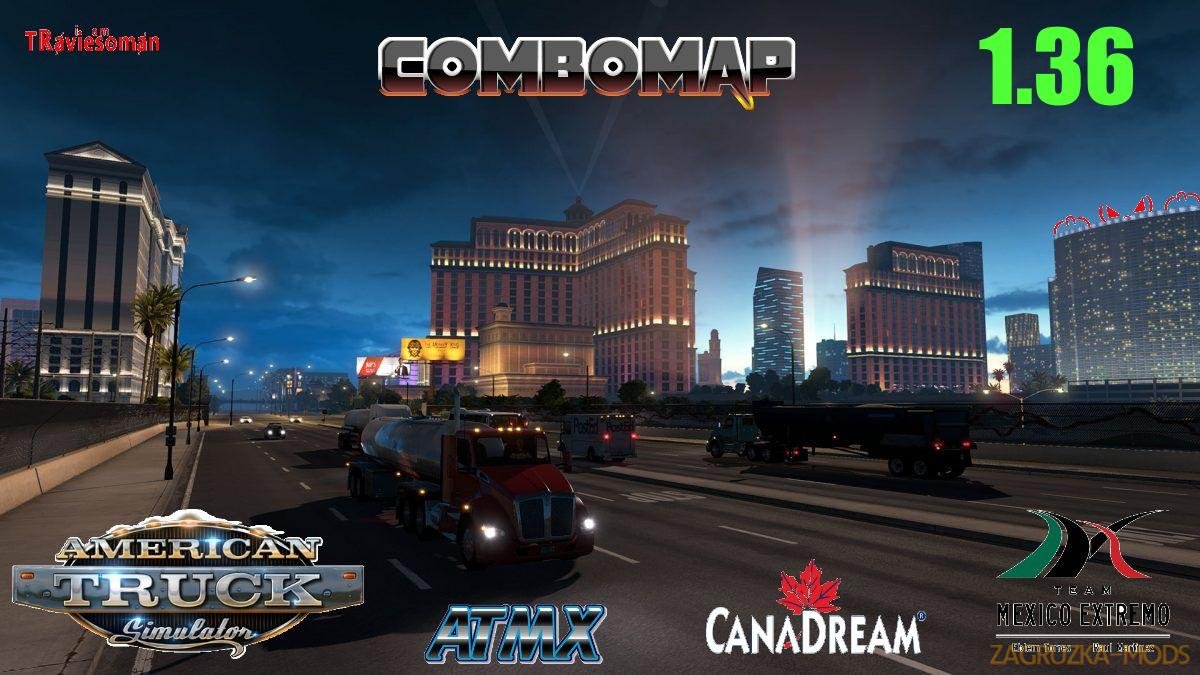 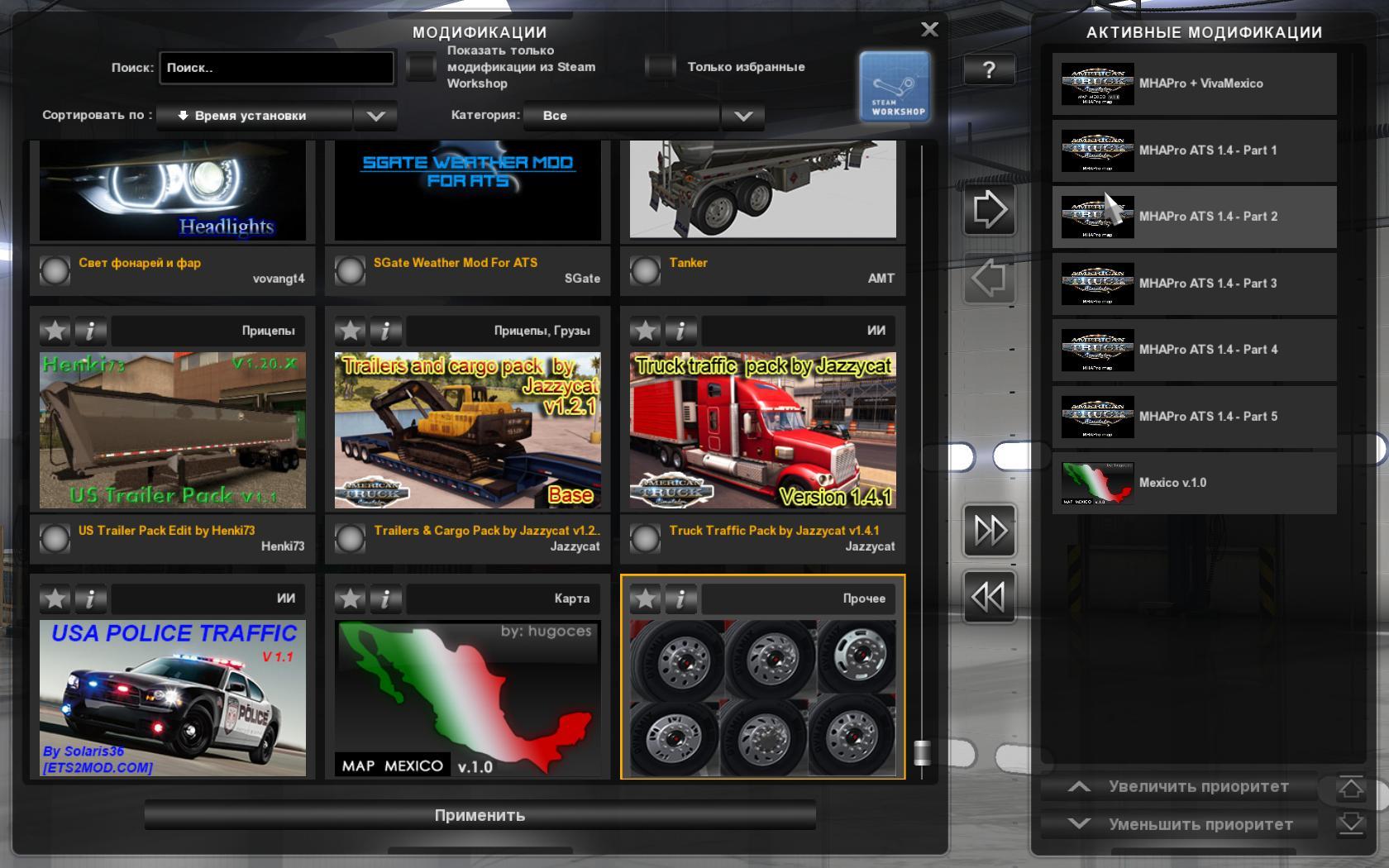