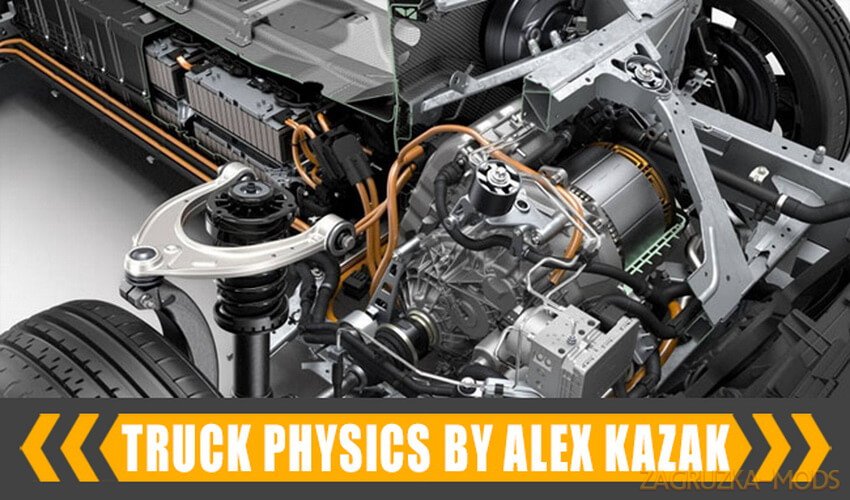 Download Truck Physics Mod v0.3.1 by Alex Kazak (1.39.x) for ETS2 | Euro Truck Simulator 2 game.
A great addition added to the game Euro Truck Simulator 2 is Mod Truck Physics Mod by Alex Kazak for 1.39.x game version, which can be downloaded for free and without registration. You can also see other fashion from the category Other mods for Euro Truck Simulator 2 or go to the main section ETS2 mods.
Truck Physics - The modification brings the behavior of the truck and trailer closer to realistic (as far as the game engine allows). The changes affected the physical properties of the truck cab suspension, truck chassis, and trailer, also, the pneumatic seat (rocking chamber), brakes and transmission were configured.
Features mod Truck Physics:
- the cab suspension stroke is set;
- damping of the cab suspension;
- lateral stability of the cab;
- maximum tilt angles of the cab forward/backward;
- damping and running of the truck and trailer suspension;
- the stiffness of the lateral stability;
- maximum temperature of the brake pads and their wear;
- redesigned transmission;
- redesigned accelerator pedal;
- adjusted air resistance and inertia;
- changing the rotation of the front wheels angle
- compatibility with all default SCS trucks
Changes in v0.3.1:
Changed (file "BASE"):
- improved transmission
- improved cab suspension
- improved braking system
- improved steering wheel sensitivity
- improved truck and trailer suspension
- improved suspension of the driver's seat
- modified cab tilt angle forward and backward
- changed the coefficients of longitudinal and lateral slip
Added support for mod trucks ("DLC" file):
- Kamaz K5 by Lacoste36
- other trucks support (see full the changelog here) Real Physics and Suspension Behaviour v2.0 by MKR for ATS

Sophisticated physics for realistic lovers, 50% of the reworked Physics Advanced Techkilla. Not for the riders. To this physics you will feel all the charm of a heavy management,...