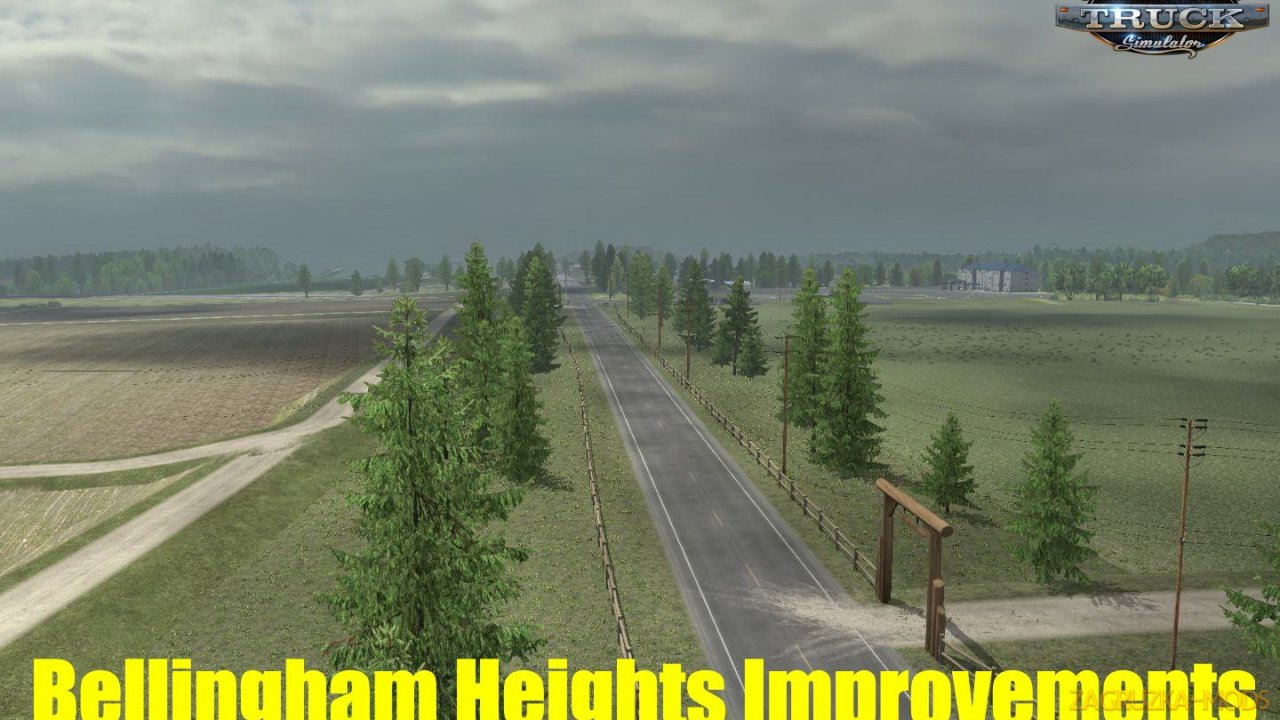 Download mod Bellingham Heights Improvements v4.0 (1.38.x) for ATS | American Truck Simulator game.
A great addition added to the game American Truck Simulator is Mod Bellingham heights Improvements for 1.38.x game version, which can be downloaded for free and without registration. You can also see other maps from the category Maps for American Truck Simulator or go to the main section ATS mods.
Bellingham heights Improvements -  first work from the author which adds some improvements to the Bellingham.
Features mod Bellingham Heights Improvements:
- New semi-fake town "Middle Fork Valley"
- Some part of "Mosquito Lake road" near Middle Fork Nooksack river.
- A little bit improved unhidden road from Bellingham to Deepgrove company (some road signs were added or improved)
- Road signs edited near Everett, WA ("Darwing" writings on road navigation signs changed to "Boeing" ones)
- The roads between Bellingham and Deepgrove company, also roads near Astoria, Coos Bay, detour rough road on OR58 are made visible on the map.
- Parking spot near a house in Redmond, OR (this town are not visible on map, it located to north from Bend, OR. I made it just for myself use for playing roleplay situation of living there).
Changes in v4.0:
- New town Glacier with two companies for delivering cargoes
- New eastern part of WA-542 road through Glacier straight to Mount Baker view
- New part of mountain forest road which connects the road hidden by SCS with WA-542 road on North
- Correcting bugs which was found by me and reported earlier by another ATS truckers
- Some cosmetic corrections on previously released roads (WA-9, Middle Fork valley, Mosquito Lake rd)
- Truck stop at the end of the WA-542 road on a hill with beautiful view to Mount Baker.

Old Changes
Changes in v3.0:
- Continuing of Mosquito Lake Rd. down to South - South-West to connect it with WA-9 Rd.
- Rest Area and view point from the hill on my small town "Middle Fork Valley" near Mosquito Lake Rd.
- Continuing of WA-9 rd. up to North
- Adding a little piece of WA-542 Rd.
- Adding of scenery town Deming
- Improving scenery town Wickersham (rail road has been added)
- Some small improvements in road signs and road marking.
- Small updates to correct some bugs and mistakes on the map.


Changes in v2.0:
- New WA-9 Road from Van Zandt to WA-20.
- Also some new roads near Bellingham, near WA-20.
- Some more road sign improvements on WA-20 near I-5 and on SCS's road which has unhidden in the mod.
- Improvements on default SCS's landscapes for better looking from WA-9 and other new roads.
Download #1 | Download #2